Hotel Vieni was founded in 1924 in Orestiada by Ioannis Ioannidis, father of Nickolaos Ioannidis , under the name “Giannis” with 18 beds and an open-air cinema . He also founded a cinema in Dasiou Square. Hotel “Giannis” was later extended to 20 rooms and 35 beds. Later on , Nickolaos Ioannidis takes over and renames the hotel “Vienni”.( The reason for choosing this name was financial, since only two letters had to be changed in the illuminated sign). In the following years the hotel was extended continuously in order to meet the increasing demand of its services. It was ,for a long period of time, the only hotel in the area. The extensions/ renovations were the following: 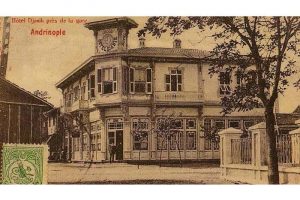